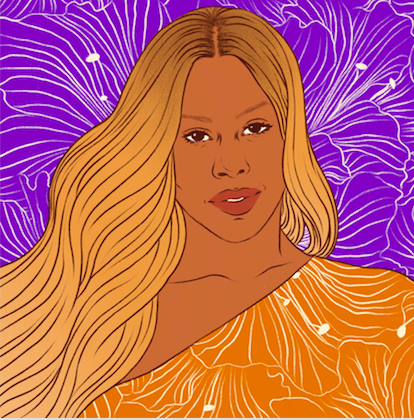 LOS ANGELES, CA (June 26, 2020) – Lifetime, a network known for telling women’s stories, extends its power to shine a spotlight on incredible women on its social media platforms with the launch of the new initiative #FierceFemaleFriday, highlighting women who have made impactful contributions to the world.  Each Friday, beginning today, June 26, Lifetime’s social feeds on Facebook, Instagram and Twitter will honor one woman each week, famous or not, for their big or small acts and showcase why each is worthy of being celebrated as they stand for something bigger than themselves and selflessly advocate for others.  As part of the initiative, the woman chosen will be commemorated with a special portrait created by a female artist that Lifetime commissions each month. Lifetime will further amplify these artists and bring more awareness on the network’s social media platforms  with a collective audience of over 5 million followers (Facebook – 4.4 million, Instagram – 571K and Twitter – 315K).  Lifetime will also ask followers to nominate women that should be recognized for their contributions as well.
The first set of #FierceFemaleFriday honorees selected by Lifetime that will be illustrated by artist Rachelle Baker are:
June 26 – Laverne Cox – actress and LGBTQ advocate, Laverne is a trailblazer for the transgender community, leading the growing conversation on transgender culture and rights.  Laverne speaks out about the systemic discrimination and challenges trans women of color confront daily – including workplace discrimination, homelessness, and gender-based violence – in efforts to bring forth change.
July 3 – Emily Langlois – a ER nurse from Bowling Green, Kentucky, Emily has sacrificed so much of her own life to help those in need during the pandemic. With a newborn and young daughter, she and her husband Josh made the difficult decision to have him take the girls to live with extended family while she stays behind as a frontline worker in the hospital.
July 10 – Niecy Nash – actress and gun reform advocate, Niecy has been a tireless advocate for gun reform since witnessing her mother get shot in a domestic violence incident as a teenager, and later losing her younger brother Michael to gun violence. She worked with her mother to found Mothers Against Violence in Schools in 1993, and has continued to use her voice to speak against violence and hatred.
July 17 – Catresa Hampton – this single mother hails from Toledo, Ohio and is an essential worker, who has never missed a shift as a bus driver, who does her part during the pandemic, despite great personal risk.
July 24 – Aunjanue Ellis – actress and social justice advocate, Aunjanue is also the co-founder of Take it Down America  striving toward the abolition of racist southern symbols from Mississippi and other surrounding states through education, advocacy, and short documentaries.
July 31 – Amanda Nguyen – Amanda and her nonprofit Rise works tirelessly to protect the civil rights of sexual assault and rape survivors.  With the pandemic, she established the Survivor Safe Haven program to combat the spike in sexual violence resulting from stay-at-home policies.  Additionally, Amanda is the powerhouse behind the Sexual Assault Survivors’ Bill of Rights, which has passed in 24 states and the District of Columbia.  Amanda was nominated for a Nobel Peace Prize in 2019 for her activism and received the Nelson Mandela Changemaker Award.
The first six artists featured for June/July 2020 – December 2020 are all women of color and include Rachelle Baker, Aisha Simone, Ryan Oakley, Steffi Walthall, Alisha Wilkerson and Kim Ekdahl.  Artist bios listed below:

Rachelle Baker – June/July
Rachelle, 29, is a multidisciplinary artist and illustrator from Detroit MI. She has a Capricorn sun, a Scorpio moon, and has a deep and undying love for Shoujo Manga; twitter is @thelittleanimal and insta is @indoorcatgirl. https://www.rachellebakerdraws.com/

Aisha Simone – August
Aisha, 21, hails from Chesapeake. Virginia and is a black artist and writer whose work focuses on the intersection between blackness, womanhood and mental health. @artforaisha on insta, twitter, facebook and medium.

Ryan Oakley – September
Ryan, 26, is a multimedia artist  from Greensboro, NC,  creating anything from digital works of art and logos to traditional drawings and oil paintings. She is inspired by comic book art and diverse and strong women, which is often reflected in her work; twitter is @mutantx_28 and insta is @ryanoakleyart. https://oakleyrlo16.wixsite.com/hartestudio

Steffi Walthall – October
Steffi, 24, is a US-based illustrator and character designer born and raised in Virginia. She attended the Savannah College of Art & Design (SCAD), where she received her BFA in Game Development. During her time at SCAD, she developed a line-focused, graphic style. Working primarily in Photoshop, she focuses on crafting a diverse range of characters and unique stories. Steffi draws a majority of her inspiration from mythology, history, film, and science fiction. When she isn’t busy creating something new, you can find her listening to D&D podcasts, reading comic books, or playing video games with her friends.

Kim Ekdahl – December
Kim, 32, is a freelance illustrator based in Sweden. She has roots in game development and worked as a Lead artist in the game industry before deciding to pursue illustration fulltime. Working with games made her realize her love for creating unique characters and telling enchanting stories with her art. When she’s not illustrating she enjoys playing games, reading fantasy or sci-fi novels and taking care of her plants, which are all things that inspires her art greatly. She loves working with color, usually bright saturated ones, and is always on the hunt for the next perfect color palette. @pinktofu_art for insta and twitter.
ABOUT LIFETIME
Celebrating over 35 years of entertaining audiences, Lifetime is a premier entertainment destination for women dedicated to offering the highest quality original programming spanning award-winning movies, high-quality scripted series and breakout non-fiction series. Lifetime has an impressive legacy in public affairs, bringing attention to social issues that women care about with initiatives such as the long-running Stop Breast Cancer for Life, Stop Violence Against Women, and Broader Focus, a major global initiative dedicated to supporting and hiring female directors, writers and producers, including women of color, to make its content. Lifetime Television®, LMN®, Lifetime Real Women® and Lifetime Digital™ are part of Lifetime Entertainment Services, LLC, a subsidiary of A+E Networks. A+E Networks is a joint venture of the Disney-ABC Television Group and Hearst Corporation.
###
Follow Lifetime Publicity on Twitter and Instagram
A+E Networks Official Press Site: https://press.aenetworks.com
Press Contact:
Kannie Yu LaPack | kannie.yulapack@aenetworks.com