Based on Michael Landon’s Classic Drama Series Watched by Millions

Movies Produced by Propagate and Rain Productions for Lifetime 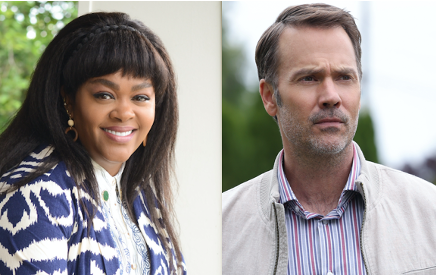 Los Angeles, CA (June 17, 2021) – Lifetime is offering an inspiring new take on a beloved classic with the greenlight of the event movie series Highway to Heaven starring Grammy® winner Jill Scott (First Wives Club), who also Executive Produces, as the new angel Angela who comes down to Earth to help people in crisis. It also stars Barry Watson (The Loudest Voice) as Junior High School principal Bruce to whom Angela reveals her true identity. In cooperation with Cindy Landon and the Michael Landon Estate, the wheel of movies are inspired by the highly-rated 80s drama that ran over 100 episodes between 1984 – 1989.  With a constant theme throughout of love and kindness, the reboot aims to inspire hope and community as it addresses contemporary social and emotional issues, this time with a female angel as the anchor of the movie series.

This marks a reunion for Lifetime and Jill Scott, who previously starred in the Emmy® nominated Flint centered on the water crisis, the all-African American reboot of Steel Magnolias and Sins of the Mother. Barry Watson also returns to Lifetime for his first non-holiday movie role for network, having previously starred in A Very Nutty Christmas and The Santa Con.

“The original Highway to Heaven was appointment viewing for millions and in a time when we need those messages of hope the most, we are excited to bring back the iconic series in a new way,” said Tanya Lopez, Executive Vice President, Scripted Programming, Lifetime & LMN. “Having worked with Jill previously for some of Lifetime’s most celebrated movies, we know she is the perfect actor to bring her passion and brilliance to this role. I just love her…Jill amplifies everything she touches in ways that make her pop off the screen. And the addition of Barry was just icing on the cake. I believe we have assembled a dynamic new duo with both Jill and Barry at the helm.”

Lifetime’s Highway to Heaven follows Angela (Jill Scott), an angel sent back to Earth by God, to help others in need.  In the premiere movie, Angela assumes the role of a temporary school counselor and finds herself working alongside the principal Bruce (Barry Watson) as she intervenes in the lives of a troubled student Cody (Ben Daon, The Astronauts) and his father Jeff (Robert Moloney, Riverdale/You Me Her) after the tragic loss of Cody’s mother, Melissa (Ashley Ross, A Series of Unfortunate Events). As Angela seemingly works miracles with Cody and Jeff, Bruce is in disbelief when he learns of the divine nature of Angela’s work.

Jill Scott is a three-time Grammy Award-winning singer-songwriter, New York Times best-selling poet, critically acclaimed actor and multimedia entrepreneur. She released her much anticipated debut record, “Who is Jill Scott? Words & Sounds, Vol. 1,” in July 2000, which became a double platinum album that earned Scott several Grammy nominations, including Best New Artist. Later she went on to have the  #1 album in the country with “The Light of The Sun” and performed at The White House. Never limited to music, Scott is a true multimedia brand across audio, books, TV and film. She currently plays the role of “Hazel” in BET+’s The First Wives Club, and is the host of J.ill the Podcast. A consummate writer at heart, she penned The Moments, The Minutes, The Hours, a compilation of poems that instantly became a New York Times bestseller. She is the founder of Blues Babe, a registered 501(c)3 foundation that supports minority students pursuing college degrees. Follow her on social media at @MissJillScott.  Jill Scott is represented by UTA and Maverick.

Barry Watson is soon to be seen starring in the CW superhero drama Naomi, based on the DC Comic. He most recently appeared opposite Russell Crowe in Showtime’s limited series The Loudest Voice, chronicling the rise and fall of former Fox News Chairman, Roger Ailes. In addition, he was the lead of the Hulu/Blumhouse Production film The Current Occupant and in Sony’s A Dog’s Way Home. Watson‘s breakout role was on 7th Heaven, starring as Matt Camden for six seasons. He has also starred in ABC’s relationship drama What About Brian and the critically acclaimed ABC comedy Samantha Who, opposite Christina Applegate. He has also appeared in Masters of Sex, Murder in the First, Hart of Dixie and Gossip Girl.  Watson is represented by Innovative Artists and Trademark Talent.

Founded in 2015 by Ben Silverman and Howard Owens, who pioneered the global format business in the late 1990s, Propagate has offices in Los Angeles, New York and Paris. Its recent credits include the Emmy-nominated “Hillary” that premiered at Sundance and Berlin and now streams on Hulu, the recently aired “Notre Dame: Our Lady of Paris” on ABC and “Go-Big Show” on TBS, and the upcoming American adaptation of The Eurovision Song Contest, as well as the unscripted “November 13: Attack on Paris” “Haunted” and “Prank Encounters” for Netflix, and “In Search Of” and “Kings of Pain” for the History Channel. In scripted, “Blood and Treasure” and “Broke” for CBS, “Charmed” for The CW, the recently aired election-themed puppet special on Fox, “Let’s Be Real” and the upcoming “Zorro” television series for NBC. Propagate also created and produced the podcast, “An Oral History of The Office” for Spotify. Propagate’s expanding portfolio of companies includes Electus (“You vs. Wild”, “Running Wild With Bear Grylls,” “Jane the Virgin,” “Fashion Star”), Big Breakfast (“Adam Ruins Everything”, “Hot Date”), Notional (“Chopped” franchise), and talent management firms Artists First, Authentic Talent & Literary Management and Select Management.

Rain Productions is a full-service production company located in Los Angeles, CA. Founded by principals Jonathan Baruch and Rob Wolken, the company specializes in high quality programming serving a wide and diverse audience. Recent productions include “All American Stories” a 2-part Documentary series that aired on The CW; award winning movie “Escaping the Madhouse,” starring Christina Ricci and Judith Light (Lifetime); and “Stitchers” which aired on Freeform for 3 seasons. Rain Productions is a sister company to Rain Management Group which is in the artist representation business and works with Golden Globe, Emmy, NAACP Image Award, Tony, Billboard nominated/winning clients. Baruch and Wolken founded Rain in 2009.

Celebrating 35 years of entertaining audiences, Lifetime is a premier entertainment destination for women dedicated to offering the highest quality original programming spanning award-winning movies, high-quality scripted series and breakout non-fiction series.  Lifetime has an impressive legacy in public affairs, bringing attention to social issues that women care about with initiatives such as the long running Stop Breast Cancer for Life now in its 25th year, Stop Violence Against Women which relaunched in 2018, and Broader Focus, a major global initiative dedicated to supporting and hiring female directors, writers and producers, including women of color, to make its content. Lifetime Television®, LMN®, Lifetime Real Women® and Lifetime Digital™ are part of Lifetime Entertainment Services, LLC, a subsidiary of A+E Networks. A+E Networks is a joint venture of the Disney-ABC Television Group and Hearst Corporation.