SETS PLANS FOR 2020 PROGRAMMING SLATE TO INCLUDE 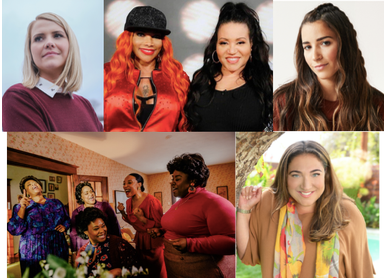 Lifetime has also ordered the documentary special From Darkness to Light from in-house production division A+E Originals and Emmy winner Leah Remini’s No Seriously Productions.  Three-time gold medalist Aly Raisman will executive produce alongside Remini.  In From Darkness to Light, Raisman provides a platform to other victims of sexual assault and highlights their compelling journeys as survivors.

“Lifetime has proven it’s as brand that believes in and stands behind the power and courage of female voices,” said Gena McCarthy, EVP, Head of Programming, Lifetime Unscripted and Head of Programming FYI.  “We’re blown away by the fearless strength Elizabeth, Aly and Leah all embody – they inspire us, and prove you can never underestimate the power of a woman.”

Lifetime additionally orders Hopelessly In Love to join its unscripted roster for next year.  Following the tragic love stories of some of the world’s most famous couples like Anna Nicole Smith and Larry Birkhead, Notorious B.I.G. and Faith Evans, Lisa “Left Eye” Lopes andAndre Rison and others, each two-hour documentary film explores the ups and downs of their romances and untimely deaths that plagued each relationship.

On the scripted front, Lifetime has commissioned a miniseries centering on hip hop pioneersSalt-N-Pepa, as they navigated through the male-dominated rap industry and reveals the influence they had on the women who followed them.  The miniseries will also feature their greatest hits like Let’s Talk About Sex, What a Man, Shoop and Push It, among others.

Lifetime also joins the choir with executive producers and Grammy winners Queen Latifah, Mary J. Blige and Missy Elliott for the feature movie, The Clark Sisters: The First Ladies of Gospel.  The authorized movie will detail their humble beginnings, struggles to find their place, to later becoming the best-selling Gospel group in the music world.  The movie will feature re-recordings of some of The Clark Sisters biggest hits like You Brought The Sunshine and stars SAG nominee, Aunjanue Ellis.  Both projects will debut in 2020.

“Bringing untold stories of phenomenal women to life has been a core tenant of Lifetime,” said Tanya Lopez, EVP of Movies, Limited Series & Original Movie Acquisitions, Lifetime and LMN.  “We are thrilled to partner with Cheryl, Sandra, Queen Latifah, Mary, Missy and The Clark Sisters for the new projects that will showcase these iconic women in music to new audiences.”

Partnering with the Association of National Advertisers (ANA)’s #SeeHer initiative, Lifetime announced new programming to increase more accurate, positive portrayals of women in media.  Supporting women both in front of and behind the camera, #SeeHer aligned programming will bring forth positive messages of females in short form and long form.  The announcement was made earlier today by Jill Baskin, CMO of Hersey’s on behalf of #SeeHer at A+E Networks’ Upfront during Lifetime’s presentation.

SALT-N-PEPA – Miniseries Event
The miniseries Salt-N-Pepa follows the story of nursing students Cheryl “Salt” James and Sandra “Pepa” Denton as they fall into the world of rap and hip hop, after recording for a friend’s school project.  Salt-N-Pepa made a huge impact in hip hop by being one of the first all-female rap groups, changing the look of hip hop and unafraid to talk about sex and share their thoughts on men.  Salt-N-Pepa became the first female rap act to go platinum and experienced ground-breaking success with multiple Grammy wins, paving the way for all female rappers to follow.  The miniseries will also feature their greatest hits like Let’s Talk About Sex, What a Man, Shoopand Push It, among others.  Salt-N-Pepa is executive produced by Cheryl James, Sandra Denton and Jesse Collins. Queen Latifah and Shakim Compere also executive produce from Flavor Unit.  The miniseries is co-executive produced by Andy Hume, Dionne Harmon and James “Jimmy” Maynes and written by Abdul Williams.

SMART JUSTICE: THE JAYME CLOSS CASE – SPECIAL – Premieres April 27
This is the incredible survival story that riveted the nation. 13-year-old Jayme Closs, kidnapped from her home in Wisconsin, after watching her mother and father murdered before her eyes. After 88 days in captivity, which began in October 2018, Jayme managed to break free, run for help, and was ultimately rescued. The special is hosted by famed survivor Elizabeth Smart, who was held captive for nine months at the age of 14 until rescued by authorities. Now an activist and advocate for missing persons, Smart leads a roundtable of women who know Jayme’s nightmare all too well, including, Gina DeJesus, Katie Beers, Kara Robinson Chamberlin, Alicia Kozakiewicz, Denise Huskins and Sarah Maynard. These women are all survivors of their own infamous abductions, assaults and attacks and for the first time, are coming together with Elizabeth to help provide valuable insight to Jayme’s story.  In addition, Elizabeth travels to Wisconsin to personally uncover new details and speaks with those closest to her and those vital in the rescue.  Produced by Telepictures, Smart Justice is executive produced by Lisa Gregorisch-Dempsey, Jeremy Spiegel and Scott Eldridge.  Mioshi Hill and Gena McCarthy executive produce for Lifetime.

FROM DARKNESS TO LIGHT WITH ALY RAISMAN – DOCUMENTARY EVENT
On January 20, 2018, three-time gold medalist Aly Raisman stared down her abuser in a Michigan courtroom, rallying other victims to step forward and demand justice and accountability.  Her voice set off a tectonic shift, exposing the pervasive system of abuse and enabling that has harmed America’s youth.  Since then, Aly has earned the trust of thousands of others, and now, joins forces with another fearless fighter, Leah Remini, to executive produceFrom Darkness to Light, to help other victims find their voice in order to start healing and turn from victim to survivor.  Produced by A+E Originals and No Seriously Productions, From Darkness to Light is also executive produced by Steve Ascher and Kristy Shabat for A+E Originals while Allie Breslin co-executive produces.  Kyell Thomas, Emily Hejlik and Peter Carlisle executive produce for Octagon.  Remini exec produces for No Seriously Productions and is represented by APA who packaged the project.

SUPERNANNY – SERIES ORDER
Jo Frost returns for 20 all-new episodes of the beloved series, Supernanny, where she will infuse her 30 years of expertise to the issues facing modern-day families.  With new social and behavioral challenges parents face today, Jo will bring hope and uplift families with her advice, techniques, and tips to iron out the chaos in their homes. Set to debut in 2020, Supernanny is produced by Shed Media and executive produced Pam Healey, Dan Peirson and Stephanie Schwam.  Jo Frost executive produces for Nanny Jo Productions.  Cat Rodriguez and Gena McCarthy executive produce for Lifetime.

HOPELESSLY IN LOVE – DOCUMENTARY FILMS
Hopelessly in Love is a tentpole documentary film series that dives deep into the love stories of infamous couples in pop culture.  Each authorized two-hour film will trace the true story of a tumultuous love affair through the eyes of the couple and those who knew them best.  Featuring deeply emotional new interviews, and never-before-seen footage, each installment will be an impassioned journey through the intense ups and downs of a whirlwind romance that was lived in the limelight.  Untold secrets will be revealed on how these star-crossed lovers ended up facing the ultimate tragedy.  Docs will cover the tragic romances of Anna Nicole Smithand Larry Birkhead, Notorious B.I.G. and Faith Evans, Lisa “Left Eye” Lopes and Andre Rison and others. Hopelessly in Love is produced by EOne and Creature Films with Tara Long, Mark Ford, Kevin Lopez and Kai Bowe executive producing.  Brie Miranda Bryant and Gena McCarthy executive produce for Lifetime.

About Lifetime
Celebrating 35 years of entertaining audiences, Lifetime is a premier entertainment destination for women dedicated to offering the highest quality original programming spanning award-winning movies, high-quality scripted series and breakout non-fiction series.  Lifetime has an impressive legacy in public affairs, bringing attention to social issues that women care about with initiatives such as the long-running Stop Breast Cancer for Life now in its 25th year, Stop Violence Against Women which relaunched in 2018, and Broader Focus, a major global initiative dedicated to supporting and hiring female directors, writers and producers, including women of color, to make its content.  Lifetime Television®, LMN®, Lifetime Real Women® and Lifetime Digital™ are part of Lifetime Entertainment Services, LLC, a subsidiary of A+E Networks. A+E Networks is a joint venture of the Disney-ABC Television Group and Hearst Corporation.