IN CELEBRATION OF WOMEN’S HISTORY MONTH, 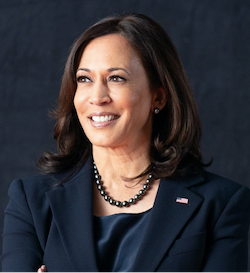 Los Angeles, CA – March 22, 2021 – It’s time to know her story. Before the close of women’s history month, Lifetime presents the special, Women Making History, featuring the first female Vice President of the United States, Kamala Harris, for an exclusive and intimate interview revealing some of the women who helped shape her life, and showcase some extraordinary women who are helping to shape our future.  The one-hour special debuts Tuesday, March 30, at 8pm ET/PT on Lifetime and is directed by award-winning filmmaker Dawn Porter of Trilogy Films and executive produced by Emmy® and Peabody Award winner Sharon Scott of Category 6 Media group™. Women Making History will also encore on Wednesday, March 31 at 8pm ET/PT on LMN.

Women Making History explores the ways women are leading the charge in everything from science and medicine to human rights and political action and breaking down barriers in previously male-dominated roles. With over 2 million women leaving the workforce during the pandemic, and bearing unequal burdens exacerbated by the pandemic, the special will also highlight the Vice President’s tireless work alongside President Biden to pass the American Rescue Plan, and why it’s an important mission of hers to get women back to work.

Women Making History features profiles of women whose innovations are positively impacting our lives now and inspiring other women and girls to continue to make change to our future. These include Golden Globe® winner for The United States vs. Billie Holiday and Grammy® nominee Andra Day*; Dr. Kizzmekia Corbett, an immunologist who was one of the scientists to help develop the mRNA-based vaccine for Covid-19; Crystal Echo Hawk, an activist and member of the Pawnee Nation, whose non-profit IllumiNative looks to challenge negative narratives and misconceptions of Native Americans; and Nobel Peace Prize nominee and founder of Rise Amanda Nguyen, a sexual assault survivor’s activist and leader in the fight against Asian American hate.

The special will also highlight everyday frontline heroes such as Carla Brown, a hospice nurse from Baton Rouge, working to get underserved communities vaccinated and Kelly O’Neill, a nurse from New Jersey who dealt with the firsthand effects of the virus and worked to keep spirits high for others during the darkest of times.

“For over 35 years, we’ve known the power of women at Lifetime, and have championed their stories and their triumphs,” said Paul Buccieri, President and Chairman A+E Networks Group. “Women Making History is a testament to the incredible strength and resiliency of women, who continue to hold up half the sky, and will continue to inspire change for our future.”

*Correction: Andra Day is not confirmed to perform. This release is edited to reflect that update.

ABOUT LIFETIME
Celebrating over 35 years of entertaining audiences, Lifetime is a premier entertainment destination for women dedicated to offering the highest quality original programming spanning award-winning movies and breakout non-fiction series and documentaries.  Lifetime has an impressive legacy in public affairs, bringing attention to social issues that women care about with initiatives such as the long-running Stop Breast Cancer for Life, Stop Violence Against Women, and Broader Focus, a major global initiative dedicated to supporting and hiring female directors, writers and producers, including women of color, to make its content. Lifetime Television®, LMN®, Lifetime Real Women® and Lifetime Digital™ are part of Lifetime Entertainment Services, LLC, a subsidiary of A+E Networks. A+E Networks is a joint venture of the Disney-ABC Television Group and Hearst Corporation.