NIA SIOUX AND SHERRI SHEPHERD SET TO STAR IN

AND THE PRESSURES TO FIT IN 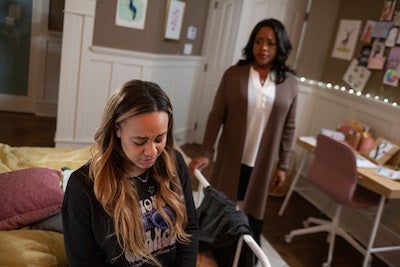 Imperfect High is the story of Hanna Brooks (Sioux), the new girl in town who is looking to find her place and fit in at Lakewood High School, which was rocked a couple of years earlier by the shocking drug overdose of a popular student. Hanna suffers from an anxiety disorder and the move to a new school is especially stressful for her. While trying to fit in with the “it” crowd, she finds herself pulled between two boys – a bad boy with a heart of gold, and an alluring, popular rich kid who is not as straight of an arrow as he seems. Her relationship with them sweeps her into a dangerous situation that her mother Deborah (Shepherd) must fight to save her from. Ali Skovbye (Firefly Lane) also stars.

Imperfect High marks Sioux and Shepherd’s return to Lifetime. Previously, Sioux was one of the original cast members of the pop culture phenomenon series Dance Moms where she appeared on nearly 200 episodes of the show. Shepherd starred in Lifetime’s first ever comedy series, Sherri, loosely based on her life.

As part of the movie’s debut, Lifetime will share the hotline and resource information for SAMHSA – Substance Abuse and Mental Health Services Administration – on air, and across the network’s social media platforms. Imperfect High is produced by Tina Pehme and Kim C. Roberts of Sepia Films for Lifetime. Sheri Singer is the executive producer, and Siobhan Devine directs from a script written by Anne Marie Hess. The film reunites the producers and writer of Perfect High.

Celebrating over 35 years of entertaining audiences, Lifetime is a premier entertainment destination for women dedicated to offering the highest quality original programming spanning award-winning movies, high-quality scripted series and breakout non-fiction series.  Lifetime has an impressive legacy in public affairs, bringing attention to social issues that women care about with initiatives such as the long-running Stop Breast Cancer for Life, Stop Violence Against Women, and Broader Focus, a major global initiative dedicated to supporting and hiring female directors, writers and producers, including women of color, to make its content.  Lifetime Television®, LMN®, Lifetime Real Women® and Lifetime Digital™ are part of Lifetime Entertainment Services, LLC, a subsidiary of A+E Networks. A+E Networks is a joint venture of the Disney-ABC Television Group and Hearst Corporation.