GET READY TO RUMBLE!

THE RAP GAME ARENA OPENS FOR SEASON THREE
ON JANUARY 13 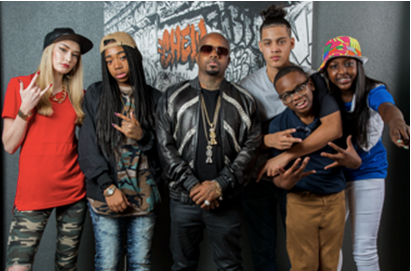 The Rap Game fueled Lifetime to rank as the #1 cable network in its Friday time period among W18-49 and W25-54. With a median age of 33, the show continues to be Lifetime’s youngest series for 2016.

The rappers this season are include:

Nova, 16, Reading, PA – Full of personality and drive, Nova works hard honing his craft because he knows he’s good enough to make it. Surrounded by an incredible support group, Nova is managed by his uncle Ekko who will stop at nothing to help him achieve his dream of becoming the next big rap star.

King Roscoe, 13, Atlanta, GA – It takes a village and Al’Dreco Jones, aka King Roscoe, has an entire team managing him from an image consultant, to vocal coach, to his mom-ager Deishonna. King Roscoe’s interest in music began when he was in a writing group at school which eventually led to his mom taking him to a recording studio. His first single “All A Student” received 88K views on YouTube.

Tally, 16, Nashville, TN – Audiences were first introduced last season to the talented teen from Nashville whose rapping abilities were discovered accidentally after rapping the hook to a song her sister was singing. But after being cut from the competition, Tally is back with a vengeance. She’s ready to prove that this time around, she has what it takes to win.

Deetranada/Dee, 15, Baltimore, MD – After performing in her seventh grade talent contest, Dee knew she wanted to be a rapper. Her brother Jermaine, a successful hip hop dancer, realized her potential and now, they are working together to build up her social media presence. Jermaine has no doubt that his little sister’s talent and work ethic will push her to the top.

Flau’jae, 12, Savannah, GA – The youngest of the group, rapping is in Flau’jae’s DNA. Shortly before she was born, her father Camouflage, an up-and-coming rapper with a record deal was tragically murdered. Camouflage’s friends, Master P, Birdman and Lil Boosie among others, recognized Flau’jae’s early talents and along with her mother Kia, have helped to mentor the budding rapper. Even though she never had the chance to meet him, Flau’jae knows her dad would be proud that she is carrying on his legacy.

Lifetime is a premier entertainment destination for women dedicated to offering the highest quality original programming spanning scripted series, non-fiction series and movies. The critically acclaimed UnREAL, Project Runway, Dance Moms, Bring It!, The Rap Game and Little Women franchises anchor the network’s programming, in addition to its over 25 original movies annually that continue to define the TV movie genre. In 2015, Lifetime launched Broad Focus, a major global initiative dedicated to supporting and hiring female directors, writers and producers to make its content which totals over 450 original hours. Lifetime’s Fempire positions the network as a curator of feminist content and conversations, as well as a place where women connect, learn and are entertained. Lifetime Television®, LMN®, Lifetime Real Women® and Lifetime Digital™ are part of Lifetime Entertainment Services, LLC, a subsidiary of A+E Networks. A+E Networks is a joint venture of the Disney-ABC Television Group and Hearst Corporation.