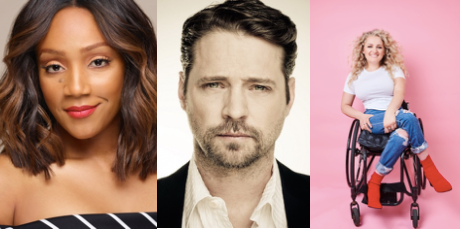 Los Angeles, CA – August 3, 2020 – Reaching over 80.1 million total viewers1 during last year’s It’s a Wonderful Lifetime programming block,  Lifetime emerged as the #1 holiday movie destination. For 2020, the star studded It’s a Wonderful Lifetime slate will feature 30 new movies, and over 1200 hours of holiday programming – 24/7 – from mid-October through December with many new and returning stars. Because the holidays are for everyone, this year Lifetime dives deeper in the commitment for diverse storytelling with its storylines, talent and characters.
Following last year’s Twinkle All the Way which featured an on screen, same sex kiss between couple Lex and Danny (Brian Sills and Mark Ghanimé), Lifetime has greenlighted The Christmas Set Up, the networks’ first movie with a LGBTQ romance as the lead story. Additionally, Lifetime has greenlighted its first holiday movie centered on a Chinese-American family in A Sugar & Spice Holiday, to be directed by Jennifer Liao and written by Eirene Donohue. Casting is currently underway on both movies, with production set to begin this month.
“We are thrilled to continue our legacy of creating a holiday destination that is welcoming to all at Lifetime,” said Amy Winter, EVP and Head of Programming, Lifetime and LMN. “With more new movies than any one cable network for streamer, I couldn’t be prouder of the incredible talent joining us in front of, and behind the camera, on these new holiday movies.”

The full It’s a Wonderful Lifetime slate will be released in September.
Descriptions for newly announced movies and stars include:
CHRISTMAS EVER AFTER
Popular romance novelist Izzi Simmons (Tony® winner Ali Stroker) spends every Christmas at her favorite snowy bed & breakfast, but this year, she’s faced with an impending deadline and a severe case of writer’s block. Luckily, inspiration strikes in the unlikely form of the B&B’s new owner Matt (Daniel DiTomasso), who bears an uncanny resemblance to the handsome hero from Izzi’s novels. As both partake in the lodge’s annual itinerary of Christmas activities, Izzi’s writer’s block is cured and the first pages of her and Matt’s own love story may just be beginning.  Christmas Ever After is produced by Neshama Entertainment in Association with Marvista Entertainment and executive produced by Arnie Zipursky, Suzanne Berger, Julianna Hays, Larry Grimaldi, Hannah Pillemer and Fernando Szew.  Pat Kiely directs from a script by Katrina Mathewson and Tanner Bean.
CHRISTMAS UNWRAPPED
From executive producer Tiffany Haddish, Christmas Unwrapped follows Charity (Amber Stevens West), an ambitious reporter, who learns the true meaning of Christmas when she investigates Erik Gallagher (Marco Grazzini), a beloved member of the town who insists all the gifts he provides are from none-other than Santa himself. Cheryl Ladd also stars.  Additional executive producers include Tracy “Twinkie” Bryd and Dominque Telson, Arnie Zipursky and Suzanne Berger for Neshama Entertainment and Larry Grimaldi, Hannah Pillemer and Fernando Szew for MarVista Entertainment. Bosede Williams directed from a script by Gary Hardwick.
DEAR CHRISTMAS
Natalie Morgan (Melissa Joan Hart) is an author and host of a popular podcast, Holiday Love, which shares true stories of holiday romance with its listeners. While to the outside world and her listeners everywhere see Natalie is an expert on romance, she’s never truly experienced a romance of her own. As Natalie prepares to embark on a promotional tour for her new book, she stops back home to spend Christmas with her family and to celebrate her parent’s 50th anniversary where she unexpectedly  begins to experience her own holiday romance as sparks ignite with local firefighter, Jack (Jason Priestley). Dear Christmas also stars Robin Givens, Ed Begley Jr and Faith Prince and is produced by Hartbreak Films, Paula Hart and Melissa Joan Hart. Emily Moss Wilson directs from a script by Juliet Giglio and Keith Giglio.
A SUGAR & SPICE HOLIDAY
Suzie, a rising young architect, returns to her small hometown in Maine for Christmas where, her Chinese American family runs the local Lobster Bar. Following the loss of her beloved grandmother who was a legendary baker in their community, Suzie is guilted into following in her grandmother’s footsteps by entering the local gingerbread house competition.  Teaming up with an old high school friend Billy, who grew up to be a catch, Suzie must find the right recipes and mix of sugar and spice to win the competition and perhaps find some love in the process.  A Sugar & Spice Holiday is produced by Brightlight Pictures and executive produced by Nancy Bennett, Shawn Williamson and Jamie Goehring, directed by Jennifer Liao and written by Eirene Donohue.
THE CHRISTMAS SET UP
Hugo, a New York corporate lawyer and his best friend Madelyn head to Milwaukee to spend the holidays with his mom Kate, who is also in charge of the local Christmas celebrations. Ever the matchmaker, Kate arranges for Hugo to run into Patrick, Hugo’s high school friend and secret crush, who has recently returned after a successful stint in Silicon Valley.  As they enjoy the local holiday festivities together, Hugo and Patrick’s attraction to each other is undeniable and it looks as though Kate’s well-intentioned Santa-style matchmaking is a success. But as Hugo receives word of a big promotion requiring a move to London, he must decide what is most important to him.  The Christmas Set Up is produced by Neshama Entertainment in association with MarVista Entertainment and executive produced by Danielle von Zerneck, Larry Grimaldi, Hannah Pillemer, Fernando Szew, Suzanne Berger and Arnie Zipursky.  Script is written by Michael J. Murray.
1Source:  Nielsen Live+7, 10/21/19-12/25/19, Total Day M-Sun  6a-6a, Reach (000s) among P2+, 1+ minute qualifier, based on original holiday movie telecasts by network.
ABOUT LIFETIME
Celebrating 35 years of entertaining audiences, Lifetime is a premier entertainment destination for women dedicated to offering the highest quality original programming spanning award-winning movies and breakout non-fiction series and documentaries.  Lifetime has an impressive legacy in public affairs, bringing attention to social issues that women care about with initiatives such as the long-running Stop Breast Cancer for Life, Stop Violence Against Women , and Broader Focus, a major global initiative dedicated to supporting and hiring female directors, writers and producers, including women of color, to make its content.  Lifetime Television®, LMN®, Lifetime Real Women® and Lifetime Digital™ are part of Lifetime Entertainment Services, LLC, a subsidiary of A+E Networks. A+E Networks is a joint venture of the Disney-ABC Television Group and Hearst Corporation.
###
Follow Lifetime Publicity on Twitter and Instagram
A+E Networks Official Press Site: http://press.aenetworks.com